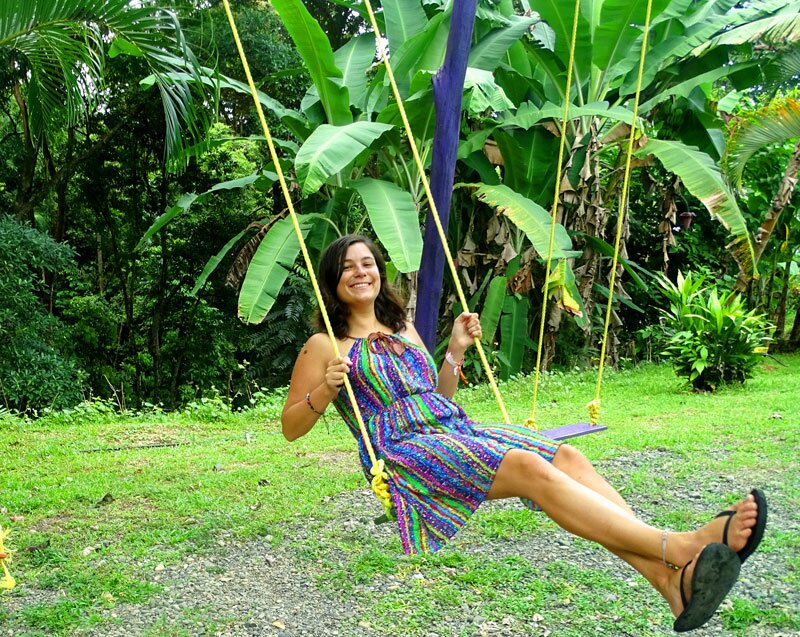 I knew going to Costa Rica would be a big change for me, but I couldn’t have predicted just how much it would change me. It was a new experience adapting to a new culture, but for me it seemed to be a positive adjustment as I easily connected with their values. Ultimately, I was able to come back with at least a little more worldliness and perspective. Most importantly, I was able to bring back many of the values I learned from living in paradise, in the (borderline) happiest country in the world… After spending four months in a foreign country with limited language skills, and particularly after spending four months in Costa Rica, patience is something you will undoubtedly learn. From trying to communicate with the locals, trying to stand your ground when the taxi drivers try to rip you off, asking for directions (directions are enough of a struggle in and of themselves here let alone in a foreign language), or just asking anything more than a basic question in another language, you learn to be patient with yourself. From bus rides that were meant to be four hours but end up being double, to going somewhere and being entirely uncertain where I was going or how I was getting back, to the times where nothing went the way I was expecting, I learned to just enjoy the ride. Things might move a little slower here, but I didn’t find that to be such a bad thing. Even in the most frustrating moments, I learned to make the best of things. Yet, most of the time, I just stopped noticing or caring when things took a little longer or strayed from the path. These moments of waiting are just moments of learning, moments of living, existing, enjoying the people we’re with, fully experiencing where we are. They remind us that we don’t need to speed through everything. It’s not always the destination, sometimes the moments spent in the “in between” are the best part.

2. Having Less and Living Simply Living here, I saw for myself that money doesn’t buy happiness. People here don’t have everything, they don’t have a million extra pairs of shoes and all the latest technologies. They don’t buy a ton of extra food or material things, they have only what they need and that’s enough. The lifestyle here overall is so much more simplified. People are just happy to be alive and cherish their existence, rather than the things they own. Instead of constantly trying to get more things, they are content where they are. People truly appreciate what they have, the people they are with, and their lives as they are.

Having to pack all of my things I needed for four months in one suitcase was not nearly as hard as I expected it to be. I realized that when it came down to it the true essentials aren’t that much, and I own way more stuff than I actually need or use. Learning to live in Costa Rica with less things, I had less options when I decided what to wear or what to do when I had free time, so the choice was that much more simple. With less stuff cluttering my mind and less options, I learned to live more simply and I had less to worry about. So after coming home and packing back up for college in the states, I made a point to pack with the same mindset as if I were going to take a plane, and only had a limited amount of stuff I could take with me back to college. Although it did end up being more than what I took to Costa Rica, I eliminated as much extra stuff as I could to continue living with this mindset. It’s nice to have options, but it truly simplifies things when you have less extra things, which allows for less complications. I’ve always been a nature lover, and I always dreamt of seeing the rainforests and biodiversity of the world. So ultimately, Costa Rica could not have been a better choice for me. I truly gained an appreciation for nature and its incredibly striking beauty. Living in a country with so many different climates and diversity of landscapes, trees, plants, and animals, I found myself constantly amazed. I white water rafted through one of the top five scenic rivers in the world, alongside untouched primary forests. I hiked up volcanoes, swam in natural hot springs, walked along nearly secluded beaches surrounded by jungle, and walked through numerous cloud forests, rain forests, and dry forests. I swam along the coasts of both the Atlantic and Pacific Ocean, in beaches each entirely unique from the ones next to it. I saw an incredible biodiversity of plants and animals. I saw red-eyed tree frogs, red poison dart frogs, four types of monkeys, sloths, toucans, macaws, parrots, iguanas, lizards, a viper snake and an ocelot (not even close to the amount of biodiversity that exists) all in their natural habitats. I fell in love with this country for its nature. When taking buses to different places on weekends, I felt like we were just one small part driving through this undisturbed natural world, rather than driving through as a part of the larger industrial world.

With this enhanced appreciation for nature and coming out of a more environmentally friendly country, I feel so much more of an awareness at just how many ways I am able to adjust my habits in order to live more environmentally consciously. Not that I would say I was overly wasteful, but truthfully I didn’t always think too much into it or too deeply about how my actions and use of materials could impact the environment. It’s easy to not think about the process, and just continue doing the same things, because we are not directly involved, and we do not directly see how every little action each of us makes builds up and has a negative impact on our environment. Living in Costa Rica, it was clear to me why people were, overall, so much more environmentally conscious and less wasteful. Being part of such a breathtaking country with the abundance of natural land, people are frequently reminded firsthand of their precious environment and want to protect it. In general, I found people are so much less wasteful of food, clothes, everything. They are more mindful of what they buy, make use of all extra things in whatever way they can, and are aware of the ways they can reduce their impact on the environment.

Returning to the states, this is one of the major ways in which I have changed my mindset. Although I haven’t necessarily made any major changes in this area, I am constantly aware and mindful of ways in which I can reduce my waste and overall just buy less stuff. I am making an effort to gradually cut back extra waste in small ways, save energy whenever I can, and be more resourceful in order to make a smaller impact on the environment.

The ticos may have not have as much money or things, but that does not mean they have any less to give. Most importantly, they will always give you their time. No matter what they may be doing, most of the ticos I met were incredibly generous and always open and willing to give their time to help me out. I learned this through not only my tico family, but also from several kind strangers who helped me along the way on weekend trips and such. From the time a group of local students we had just met helped my friends and I find a place to stay when our bus arrived too late – to the time a park ranger lent me a rain jacket, gave me a resident price (5x cheaper – long story but I greatly underestimated the cost of the taxi), and ended up taking me on a tour through the national park when my solo day trip didn’t go quite as smoothly as I had planned – to the simple reminders of acknowledgement and genuine care when ticos took the time to say “pura vida” when I passed by or really listened (and sometimes even nicely tried to help me improve) in my attempts at communicating in their language, I truly found this genuine sense of generosity everywhere I went.

I always got the feeling that people actually cared to listen and help me in whatever way they could, so much so that they seemed to want to help even when they didn’t have an answer. It’s a good feeling to know that people are willing to take the time and effort to help you, especially as a foreigner adjusting to living in a new country. Overall, this sense of welcomeness and generosity I experienced was part of the reason I was able to feel so at home here.

And of course, Costa Rica taught me the true meaning of this expression, and why it is more than just an expression but a way of life. Pura vida, is directly translated to pure life, which to me summarizes all five of the points above. It’s not even something that can be fully explained. No matter what words I use, there are no words to describe it completely. It is something that must be felt and experienced. To me, pura vida is about living simply, experiencing each moment equally full of life, and simply embracing the fact that we are alive. Pura Vida is everything.

Studying abroad in Costa Rica was no doubt the best decision I ever made. I may not have had the most intense college courses of my life, but I learned more about myself, the world, and the most important values in life than I could ever have imagined. These are the types of things you only learn from experience. The type of things that stay with you forever.

And I did it. I experienced it.